The schooner was designed and fitted out in 1925 by the “Codecasa” yard in Viareggio.

After working for many years, it was transformed in the 1970s into a charter boat, sailing until 1986.

In 1986, after changing hands, the new owner started a major refurbishment project on the boat at the “Del Carlo” yard in Viareggio, a specialist in the restoration of timber vessels, and also collaborating amongst others with the De Pas, D’Urbino and Lomazzi architectural design studio in Milan. 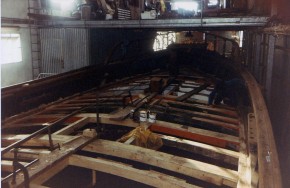 The woods used for this schooner, which has a waterline length of 22 metres and a length overall of 26.8 metres, are oak, teak, mahogany and olive root.

The sail plan was devised by Engineer Luca Taddei of Lerici (La Spezia), and the sails themselves were supplied by the company Sobstad (USA).

After three years of work in the yard, the schooner was launched again with the name “Anniventi”.

Since then it has always received RINA Inspection Reports and confirmation of its Classification Certificate for leisure craft no. 72955, with a rating of 100-A1.1; NAV A.

Every year the owner has the schooner hauled up at the specialist “Del Carlo” yard in Viareggio for maintenance work and any necessary repairs.

This annual work includes the painting of the hull both above and below the waterline, together with the fender bars and stringers.

All interiors have been fully reconstructed by specialist craftsmen.

Except where the use of AISI 316 stainless steel was absolutely necessary for safety reasons, brass has been used extensively, recovering whenever possible original components from boats of the same period.

Every new fitting, whether in steel or brass, has been designed and constructed by specialist craftsmen, with the aim of making the boat unique in its category.

Between 1990 and 1991 the entire sail plan was overhauled, with the addition of double topmasts with crosstrees and new sails.

The deckhouse comprises a spacious dinette with a double divan and a table seating eight persons, and a separate galley with refrigerators and freezers, a dishwasher, an oven and a stove with four gas burners.

Below deck there are a large master cabin, with one queen-size bed and a single bed, and two guest cabins with two beds each, all en-suite with washbasin, shower, toilet and bidet, air conditioning, speakerphones and stereo systems.

At the bows there are two cabins with a separate entrance, with one single for the captain and a crew cabin, complete with bathroom and air conditioning.

Equipment in the engine room includes a new engine, a generator, a watermaker, the air conditioning

system, and new stainless steel tanks for water and fuel.

The boat is also equipped with a powerful inverter that converts power from the 24V batteries with a high capacity of 1700 A into a 220 V supply capable of operating all 220V services on board, without using the generator and in absolute silence.

In 2004 the four refrigerators in the galley were replaced with new stainless steel cold chambers, gaining greater refrigerator and freezer space, given that the two compressors were relocated to the engine room, and also significantly reducing the consumption of electrical power.

A modern new watermaker was also installed, providing 200 to 250 litres of potable water per hour.

In 2005, in addition to the routine work done annually at the yard, several furniture items in the galley were completely renewed, to make it more practical and better equipped.

The entire electrical switchboard on the main bridge was fully overhauled, modernizing it and making it more reliable, by Landucci of Viareggio. The engine was also thoroughly serviced, replacing various components as a precaution against malfunctions.

In 2006, the deckhouse was painted externally at the yard, using an All-Grip finish. Refurbishment work was also completed on the galley, installing a new dishwasher and new Alpes Inox gas burners.

The benches in the aft cockpit were renovated.

Several parts of the planking were replaced, and the Cruisair air conditioning system was partially renewed.

A new waterline was marked, and the entire upperworks were repainted in black and white.

In 2008 the schooner was at the “Del Carlo” yard for about three months for its routine annual maintenance work and repairs, and more specifically:

Quickwork: Freeboard planking stripped down to bare wood and repainted for Rina inspection. Caulking was renewed where necessary, anti-fouling treatment was applied, part of the aft keel was repaired and the tightness of pivots was checked.

Upperworks: Stripped down totally to bare wood, also replacing any areas showing slight signs of wear. Nine metres of the port stringer were entirely reconstructed, together with the sole beneath it and the port fender bar, also fitting three new top timbers on the port side.

All surfaces were protected with eight coats of paint.

In 2009 the entire quickwork was recaulked and the upperworks were repainted, together with all necessary routine maintenance work.

The entire navigation table on the bridge was renewed, modifying the console to permit the installation of the new wind repeaters. The yard also serviced the engine, replacing the injection pump and resetting operating pressures.

Forward of the deckhouse there is a spacious bridge fitted with a complete range of the most modern instruments. Under sail power, the double helm station also allows the schooner to be steered from the stern.

In 2011, the “Del Carlo” yard replaced parts of the starboard planking, together with several ribs and top timbers, and the fender bar was repaired. The propeller shaft and bushes were replaced, the refrigerator system was renovated, eliminating the external coil and installed an internal heat exchanger, and the 24V system was separated from the 220 V system, allowing two independent refrigerators systems to be obtained. As every year, the caulking was repaired and an anti-fouling treatment was applied, and the quickwork and internal white were repainted.

In April 2012 the schooner returned to the “Del Carlo” yard in Viareggio.
The following work is scheduled:

- Removal of masts for a major overhaul and revarnishing.

- Rubber caulking of all teak joints and a thorough check on the aft, cockpit and deckhouse timbers.

The home mooring of the schooner is at the “Marina Molo Vecchio” in Genoa.